Why You Should Not Replace Fuse Casually?

With the technology gathering steam, more and more electronic devices appear on our cars such as contact components. These innovative devices enhance the technical level of the whole vehicle and make the cars more efficient, safe, and comfortable to a great extent. However, a large number of electronic equipment such as electrical contact rivets also makes the circuit of the car more complicated.

The complex circuit in a harsh service environment is more likely to result in short circuits, overload, and other faults. If it is not protected correctly, it is easy to cause horrible faults such as line overheating and equipment burning like Custom Stamping Hardware Parts. In order to protect this equipment safely, our cars are equipped with fusible power fuses without exception. Thus, consumers can be sure that their safety is guaranteed.

At present, the fuses on the truck basically use the chip plug-in structure, which is very convenient to use and replace. Nonetheless, there are still a lot of hassles. You can not replace the fuse casually, otherwise, it is likely to cause equipment to burn and even fire. You should pay more attention to all the equipment both on your cars and in your house such as stamped sheet metal panels.

There are several kinds of fuses that you need to know about. Only when you are familiar enough with those devices like cold heading fasteners or stainless steel stamping parts can you know how to deal with emergencies accordingly.

At present, there is only one type of fuse used in cars. However, in earlier years, there were other types of fuses on cars, such as wound fuses. This kind of fuse also has a plug-in structure, but the fuse wire is exposed. Because this fuse needs a manual operation, the fusing current is hard to control so that you should be patient and vigilant. In addition to the winding type, there is also a common glass tube fuse in household appliances such as stamped metal panels. As this fuse is composed of glass, it is easy to break and inconvenient to carry. As a result, it has been given up for a long time. Thus, manufactures should think highly of innovation and practicality at the same time.

Nowadays, the most commonly used fuse must be the plug-in fuse, which has adopted a plug-in structure. What’s more, the shell is made of plastic with rich colors. As a matter of fact, its mystery lies in the color since the various colors are not designed to attract female drivers, but they are aimed at representing different fuse currents. You should be as familiar with it as the Silver Copper Electrical Contact Point because it is really of vital importance. 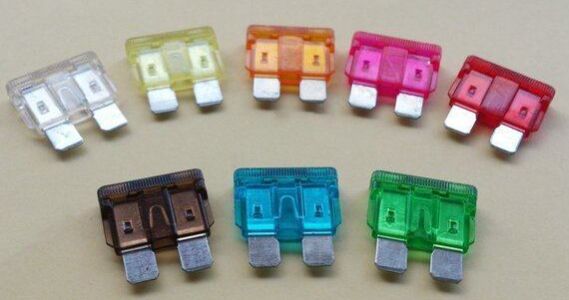 If the fuse is blown again immediately after replacing the new fuse, it indicates that the circuit system of the vehicle is out of order. At this time, you should immediately go to the automobile repair shop to find the cause of the fault if you can not figure out the problems. For example, if the cold working metal process has something wrong, you would better ask professionals for help as you do not know this.